Monday morning, and the ideas are still coming, mostly in the lunch-hour. Today, conversation turned to Scientology, and my thoughts to the ‘pataphysical consideration of religion as a system of assumptions based on assumptions. So, a Cult Generator perhaps.. you would input a “sensible” assumption.. and a string of related, but steadily more incredible, assumptions would be returned. The generative brainwasher could be an optional add-on. Hannu related this train of thought to Monty Python & The Holy Grail, and its system for identifying a witch (heavier or lighter than a duck?). Not the first mention of Monty Python today, or, indeed, in my short time in Finland. It is, it would seem, an international favourite!

But back to Nodebox. Today we tried the latest model. A much more user-friendly interface, but, ironically, after a week of coding, I found it hard to get to grips with. So it was with renewed vigour that I dove back into my epic struggles with Python. After much pinching of brow, and extended rumination on the site tutorials, I finally managed to render the basic template (a layout with recursive border) for my horoscope cards. It’s taken me several hours to achieve what would probably have taken others in the group no time at all, but it’s deepened my understanding of the operational logic of the code, and I feel like I have achieved something - yes! Now I have a basis within which I can begin to visualise a composition for the final outcomes. I’m still not entirely sure how the “cards” will look. I’ve already decided that to base them on the tarot deck would be too involving for our time-scale, and I’d rather produce images which have more immediate symbolic resonance for people..so more of a general ‘horoscope’.

The “Atomic Yggdrasil Tarot” of Daniel A.I.U Higgs springs to mind, in the way it offers deeply symbolic images, but which can be interpreted entirely within the observer’s own chosen parameters. This interaction with the symbolic syntax of the individual (and the coincidences it might spawn) is more interesting to me than the closely governed parameters of online tarot, where the meaning is recited from a book. At the same time, I want the images to be more fun and accessible than Higgs’, but without being tacky. It’s also important to me that the images don’t look like randomly-stuck-together parts, like an exquisite corpse. So these are the thoughts I will be pursuing now.

In the meantime, here is a video of one of Friday’s experiments. Visuals for an imaginary club event: HORSERAVE. K-18. Dress code: Techno-Viking horse5cmpr1 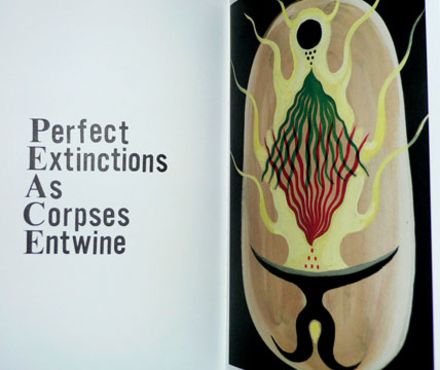 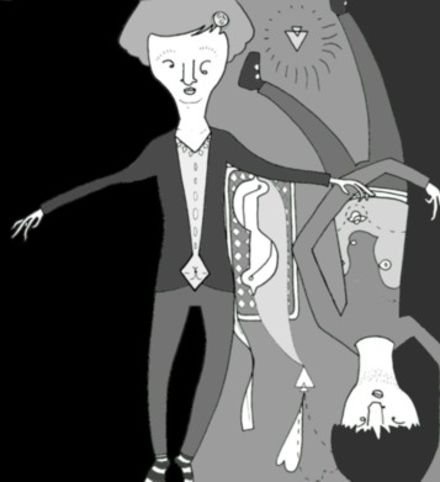