Well, Tom’s genetic algorithm proves to give interesting results. I tweaked it into making a folkish quilt from the bred blocks, which resulted in a row of smileyfaces near the bottom on the third test run. “LOL Internets!”

As the blocks try to get more and more symmetrical for each run, this is actually no surprise  it wouldn’t take the remaining age of the universe for a simple smiley to appear in a 15 × 15 grid even if the pixels were chosen purely at random. You don’t even have to strain yourself to perhaps see some other characters in the quilt, too.

Adding to this is the human bias to recognizing faces in most any kind of indeterminate patterns and textures, like, broccoli. In short  the interesting and much-exploited phenomenon of pareidolia:

Look closely  Big mr J in the picture above is actually a kid with a white sunhat (his face is Jesus’ eye)  but old beardy is a far clearer and more coherent stimulus, so he overpowers the poor Victorian infant!

This one is rather creepy, too:

The girl is standing in the doorway of a burning building the heat would be unsurvivable. You can read more about the picture above on forgetomori.com

A classic that’s already been mentioned. 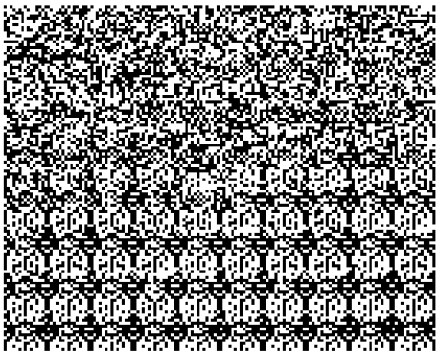